At City College Thursday, December 8th, students will be gathering in front of the administration building to pass out flyers that have facts about the tuition increases.  If you are interested in getting involved with Students United, or interested in meeting other students who are pushing back against these increases, please meet in front of the Administration building during club hours (12:30 to 2).

Thursday at 1:30 at John Jay
Chancellor Goldstein is coming to John Jay…. He just voted to raise our tuition Monday!!!!!!!
Goldstein, the man in charge of CUNY, earns almost $600,000 a year; THAT IS MORE THAN OBAMA, yet he states there’s no money and that they need to raise tuition.

Demand that he cut his PAYCHECK, not our right to an affordable education!

At the PSC office
61 Broadway
16th floor
TAX THE RICH COALITION MEETING:
Proposed Agenda:
– To identify specific targets of the 1% and brainstorm for actions
– Millionaires tax campaign next steps: keep the issue alive
– Albany legislative session: How do we build for it?
– Planning events with the Black, Puerto Rican, Hispanic and Asian Legislative Caucus
– Brainstorming ideas and sharing about everyone’s individual campaigns.

December 1 @2pm
Chancellor Goldstein will be @ John Jay
Bad News:  Discussion is only open to John Jay Students
GOOD NEWS:  There will be a rally in front at 1pm. (All Students Welcome)
Go to their FACEBOOK for more information
(will post more information about specifics when we get them) 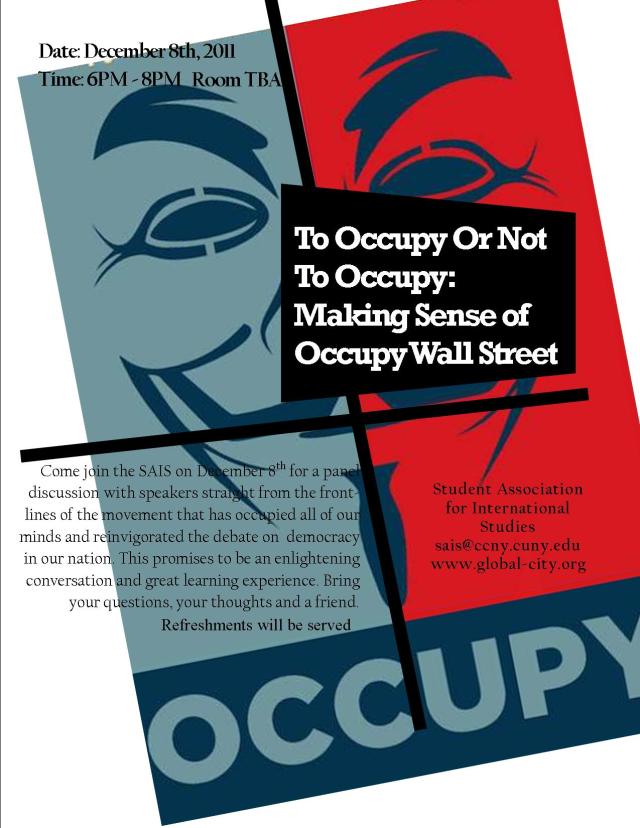 Each year we get together to celebrate the year’s victories in our struggle against capital punishment and the prison system…and to send holiday greetings to those victimized by it.

“Several hundred protesters are currently marching near Baruch College at 24th Street at Lexington Avenue to demonstrate against the planned $300/year (over five years) tuition hikes that the City University Board of Trustees is expected to vote on this afternoon, as well as a need for “democratic accountability.” There’s a heavy NYPD presence, with police on scooters attempting to funnel the demonstrators into barricaded areas and off the street.” – the gothamist 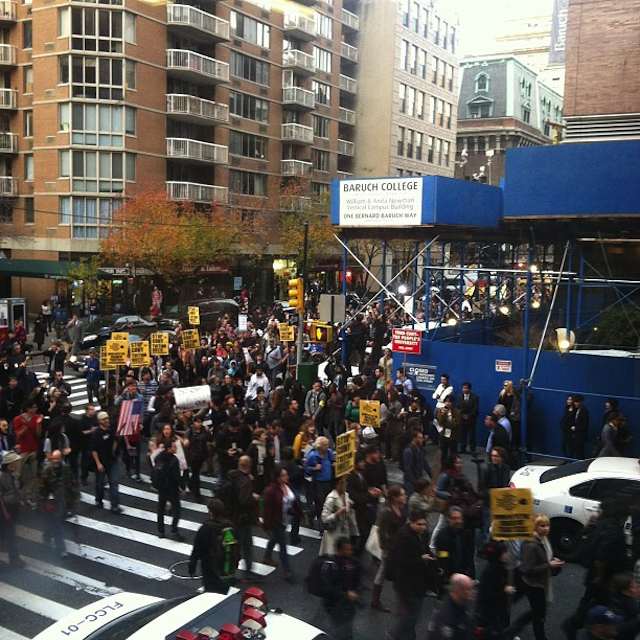 “Three hundred dollars may not seem like [much] for a lot of people, but for me it’s two months of groceries – that’s impossible for some of us,” said Meli Rodriguez LaSalle, 18, a sophomore at John Jay College. “For someone on the board of trustees, that’s one night out for dinner.” 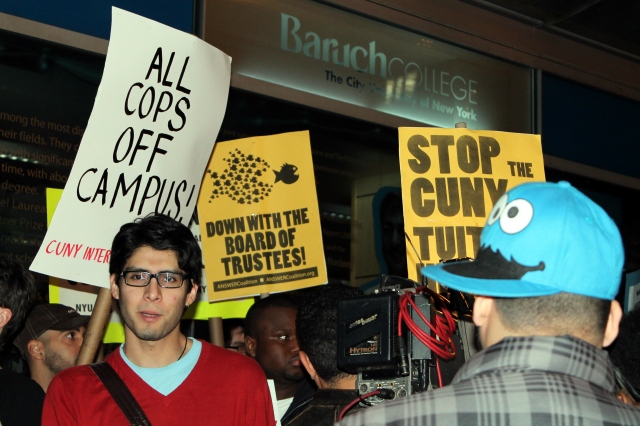 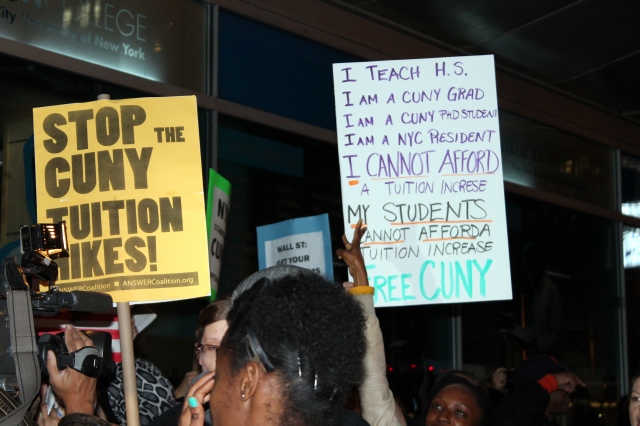 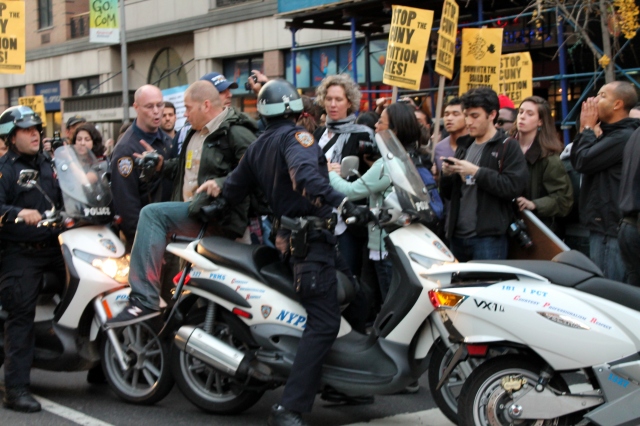 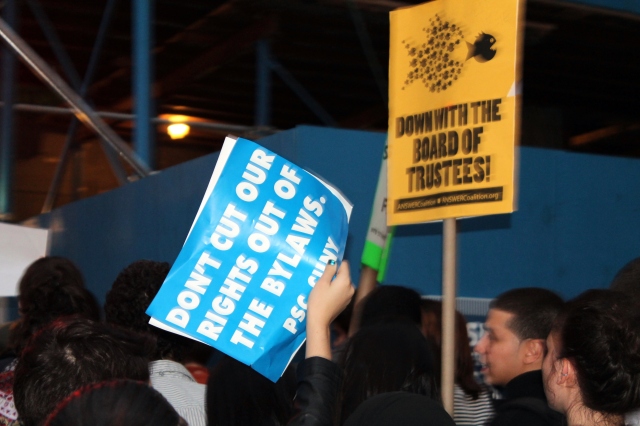 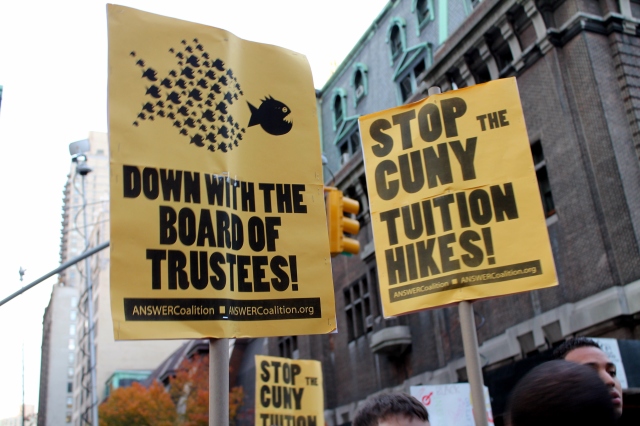 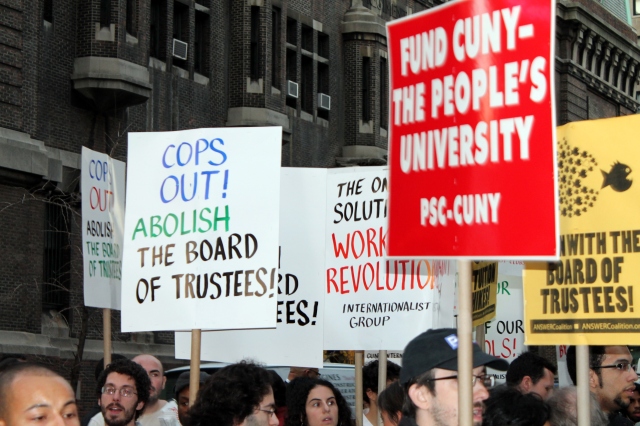 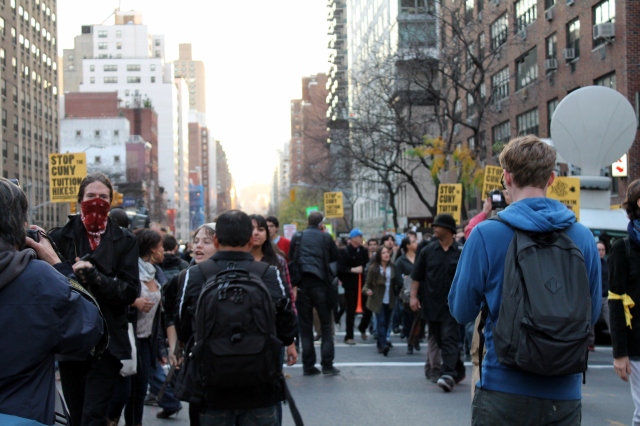 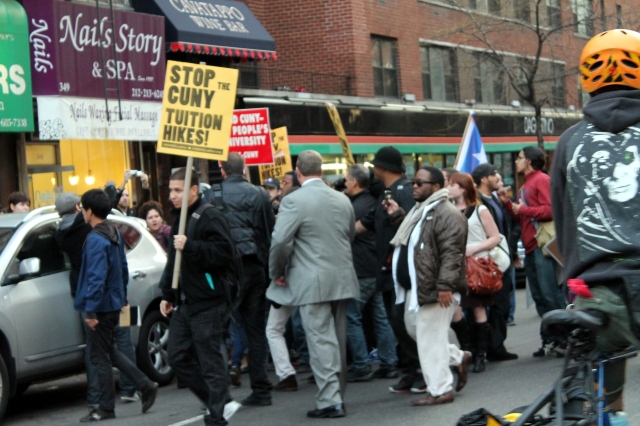 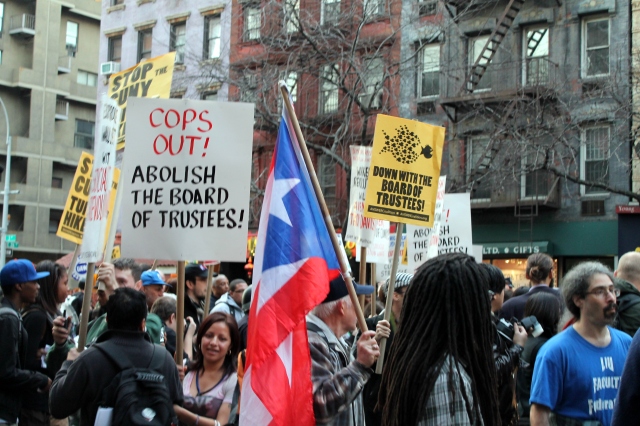 Students United for a Free CUNY is having a rally on Monday, November 28 at 4pm. We are meeting at Baruch College (East 24th Street and Lexington).

This rally is in response to a couple of things. First, the vicious attack of CUNY students by CUNY public safety officers at the Baruch campus on Monday, November 22, 2011. We demand the immediate resignation of both Chancellor Goldstein, as well as, the Head of Public Safety. Second, addressing the reason students were at Baruch on the 22nd in the first place, which was the outrageous way the Board of Trustees continues to run CUNY like a financial institution rather than an educational institution. They make tuition increases over the summer knowing many students are not on campus, they continue to increase tuition, while cutting, resources (closing libraries, writing centers, etc), they have public meetings where students and faculty are denied admittance, then are beaten for attempting to peacefully assemble and have a voice.

Students United Mission Statement is as follows: CUNY was an institution originally founded on the principle that every person has a right to excellent and accessible free higher- education. Unfortunately this came to a halt in the late 70’s when New York State instituted tuition on a public service that before was considered a right. Moreover, it was no coincidence that tuition was instituted in the same year that the incoming freshmen students where a majority people of color. Ever since then, the opportunity that was allowed to underprivileged people of the working class has been carefully, slowly, subject to cuts by those who have assumed control over our education. In our lifetimes, quality higher education continues to diminish as more classrooms become overcrowded, less services are offered to students, the deterioration of our campuses becomes more and more evident, and those who educate us and maintain and run our campuses’ day to day activities, (Faculty and Workers) face attacks on their union benefits and layoffs. This concerted attack on the working class and underprivileged by those who own and run the show will continue at a rapid rate unless we organize, educate and empower ourselves to fight and take back those opportunities won for us by former CUNY students. It has been done before and can still be done today! Students United for a Free CUNY is a Student led, Student organized, multi-campus collective of those who struggle to see a Free and Excellent CUNY once again.

We often hear about the gentrification of neighborhoods, but that is what is going on at CUNY: the gentrification of our education. Mark Torres (City College Alumnus) wrote this about the gentrification of CUNY: “…part of this gentrification plan has included imposing tuition (CUNY was free from 1847 until the 1970s when People of Color became the majority) and constantly raising tuition, underfunding CUNY, eliminating open admissions, using waiting lists to dissuade people from entering CUNY, making the application process more difficult, segregating primarily Black and Latino students into Community Colleges, underfunding and disbanding Black, Latino, Asian and Women Studies Departments and downgrading them to programs, recruiting European-American students to the Senior Colleges with scholarships and building dorms for them, and by creating a police state on campus that on a daily basis harasses and attempts to deny students their rights to free speech and assembly..”

We are not going to give up our right to higher education. Follow our progress and please visit our blog at: studentsunitedforafreecuny.wordpress.com.

We hope you will circulate this to your networks, and help support us in our continued struggle demanding access to excellent FREE higher education for every CUNY student.